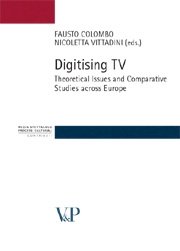 salva per dopo
Prodotto al momento non ordinabile.
Vuoi essere avvisato quando sarà disponibile?
€18,50
This volume presents the main theoretical findings and research results of a working group of Cost Action 20. This group, entitled Television and film has focused its investigation on the processes of Tv digitisation regarding both the impact of internet and the web, and the innovation of traditional media.
This book tries to answer the question: “how is digitisation changing the television medium?”. The aim is to identify paradigms useful for a policy of innovation in the television field. Particularly: how to deal with the question of power in the management of media? How to exploit and mould our current knowledge in the field of the diffusion of innovation? What can or must be the role of the public service in the envisaged scenarios? And how can we conceive television audiences of the future to be? The book presents also some comparative, cross-country studies, aimed at showing differences and recurrences in the various European countries.

Fausto Colombo is full professor of Mass media Theory and director of Osservatorio sulla Comunicazione at Catholic University of Milan. Among other books he edited Television and Interactivity, Vita e Pensiero 2004.